Hirate Masahide (平手 政秀) and the Hirate clan were loyal retainers of the Oda clan. Born in Hirate Cho, he first served Oda Nobuhide as an advisor and as a diplomat to both the Shogun and Emperor. After Nobuhide’s death, Hirate continued in his service to the Oda clan by serving his son, Nobunaga.

While renowned for his martial valor and skills in both sado (茶道) and waka (和歌), Hirate's greatest quality was his undying loyalty. After his father's death, Nobunaga (who was only 15 at the time) was ill-mannered, untidy and impudent. He failed to take his responsibilities seriously and created no end of trouble for his compatriots - a state of events that his retainers, especially Hirate Masahide desperately sought to rectify.

Eventually, Masahide decided that only a drastic move would be able to persuade his lord to fulfill his obligations. After penning his thoughts in a letter that he sent to Nobunaga, he committed seppuku (切腹) in 1553. In his grief, Nobunaga had the Seishu-ji temple built in his servant samurai’s honour.

Masahide’s home, and the site where he committed seppuku can be found in the grounds of Shiga Park, in Nagoya’s Kita Ward. The main memorial stone was set in 1802 by samurai of the Owari Han in memory of Hirate Masahide’s loyalty.

Our HIRATE ring pays homage to the incredible loyalty and self-sacrificial nature of Masahide with a handcrafted folded steel band inlaid with brass and copper. The twin bands of disparate metals set against steel make reference to the twin-lined Hirate family mon (紋) and the dual disciplines of ﻿sado ﻿and ﻿waka﻿ that Masahide was known for, while the inner layering of golden brass symbolizes the foundation of loyalty to the Oda family that Masahide espoused till the day of his death.

Like any of our accessories, the HIRATE is crafted entirely by hand, and comes with a custom bamboo box.

As the smith does not mix chromium into the metal, your HIRATE ring should be kept away from water. We have applied a layer of lacquer to give the ring a measure of water resistance, but it is always better to be safe than sorry!

If you so choose, you can request for the smith to add chromium into the steel he hand-crafts for your accessory (which will give it the stainless quality) for an added cost. Please note that the addition of chromium will cause the finish of the ring to appear shinier in appearance as opposed to the non-stainless variant.

It is highly recommended that you select the stainless option if you tend to have sweaty fingers, as sweat will potentially cause oxidization on the inner metal. For non-stainless variants, oxidization (if it occurs) can be managed with the use of a carbon steel eraser.

I have received a wondrous ring today that is expertly crafted and compliments the simplicity of my affects. The design is genuine and unique like a fingerprint. We’ll done! 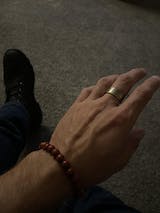 I have received a wondrous ring today that is expertly crafted and compliments the simplicity of my affects. The design is genuine and unique like a fingerprint. We’ll done!